We always take NULL very lightly. Like if we are designing database then whether it is necessary or not we allow the data field to accept null.We think it will not affect anything.

Actually , at some point this is not always true.

According to Microsoft NULL is an Unknown value. It is not EMPTY & ZERO. It is just unknown.

Now according to my experience NULL is very sensitive and should be handle with care.

While we are designing the database and in a particular table if a field can not be null according to business rule then please don’t allow NULL in that field for data consistency.

1) Two null value not equal :-  Let me explain it with an example

Now see below snap where we are comparing the null value course column. You will find in below snap that there is no result while we have null value in course

2)  Use IS NULL or IS NOT NULL  to handle null able column:-  If a column is null and you want to show all the columns which are null then instead of comparing NULL value with column as shown in above figure use IS NULL as shown in below figure

3) Handle NULL carefully with IN clause 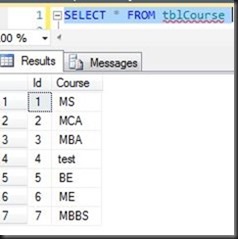 Oh !! it is not returning any course. The reason behind it is NULL is not handled properly. Now to get desire result we have to write following statement

So , be always careful when your column has null values.

I hope the above points might help you somewhere.

4 Easy software to generate data load for you