As the name suggested PARSENAME is the SQL Server function which provide help in parsing.

Lets understand this by an example

Suppose , I have an IPAddress variable which I need to parse

The syntax of the parsename is simple

see the result of above example below 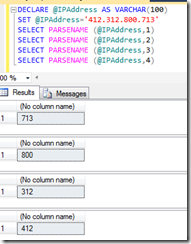